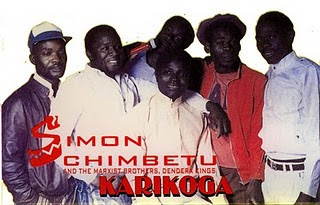 Naison Chimbetu said they started singing in a bar in Dzivaresekwa but Simon denied this dismissing his brother as 'insane'. This makes the Chimbetus' story of how they started unclear. But Naison's story has not yet been disputed and I believe he said the truth that Simon did not go to war - Wonder Guchu

There is something unclear about how the Chimbetu brothers – Simon and Naison – started their music careers. Simon and previous reports claim that they started in Tanzania while Naison said they were spotted by a ZMC officials singing in a Dzivaresekwa bar.
This was in the early days of independence. When I spoke to Simon about what Naison had said, he dismissed it as false.
Even when Simon died, there were conflicting details as to whether he went to war or did not. Simon was buried at the Mshonaland West provincial heroes’ acre for his role in the war of liberation.
But Naison’s account does not mention any of Simon’s war credentials. I believe strongly that Simon did not go to war but was abducted from a school in Msengezi but was asked to return home because he was young.
When I asked Naison about Simon’s war credentials, he refused to answer saying it was up to Simon to answer the question.
When he went back home, Simon came to the then Gillingham (now Dzivaresekwa) to avoid persecution by the Rhodesian army.
Once in Gillingham, Simon stayed with his sister’s family before Naison joined him.

After reading many articles about Simon, I beginning to see a strange person. He was cruel to say the least.