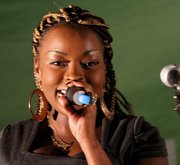 Diana Samkange who later became a member of the urban grooves group, 2BG, asked to see me after she had read my article about the late James Chimombe’s son, Freddie’s predicament in 2008.
Although I had heard about Diana, I had never met her. So when the Herald security called me saying there was a certain Diana waiting for me at the foyer, I wondered who it could be.
I then spoke to her on the phone, ‘I’m Diana Samkange. I want to see you.’
‘What’s it about?’ I asked her.
‘I am a musician. I have read your article about Freddie Chimombe. .  .’
‘Okay,’ I mumbled, giving her room to continue.
‘I want to talk to him about his father’s song which I want to record,’ she explained.
I grunted prompting her to say, ‘I want to meet him.’
I asked her to come upstairs where I gave her details and the song she wanted was Zvaitika, one of the late James Chimombe’s super hits written by Daram Kalanga who played the luring saxophone on most of Chimombe’s songs.
Diana became a member of 2BG (Two Boys and a Girl) when the girl in the group, Rutendo Muchirahondo was injured in an accident. Apart from Rutendo, 2BG had Kevin Ashley and Bloodshow ‘Blush’ Chikosi.
The group was formed in Harare in 2001 at Prince Tendai’s High Density Studios in Hillside but recorded its debut eight-track album, Searching for Love at That Squad Studio (Chamhembe).
Some of the group’s tracks were included on the compilation albums Chigutiro 1 and 2 while a 17-track album, Ndoda Kuva Newe, followed in 2004.
Blush was a co-founder of Chigutiro Studios with Sipho Mkhuhlane (TBA), Shayndingz and Jerrie. Apart from helping various urban grooves, Blush composes and sings.
He is credited with writing most of the songs recorded on the Chigutiro compilation albums. Some of the songs are Chido Changu, Rufaro, Nzwisisa, Taurai’s Bum Jive and Is it Possible.
His solo release was Story of My Heart that had Maoko Mudenga and Moyo as some of the tracks. He also returned to help 2BG record Wandizadzisa.    Blush also penned Ndoda Iwe, one of the songs that made Roki famous. Ndoda Iwe is on Chamhembe Plus. Then there was Chigutiro Anthem, as well as Chiedza and Tipei Maoko for 2BG in 2006.
Born on 11 November 1986, Diana who comes from a musical background attended Queen Elizabeth Girls High School in Harare and then Harare Polytechnic for a Diploma in Computer Programming.
She was brought to Chigutiro stable in 2004 by TBA before she joined 2BG. Diana then teamed up with Ngonie and Blush on her track Chitsidzo which is on Chigutiro Phase I. My First Diary, Diana’s solo effort was launched in 2008 at the Sports Diner in Harare. The 12-track album carries two tracks - Ndichamira Newe penned by Blush and Zvaitika originally done by the late James Chimombe.
She was assisted on the album by a number of artists among them Russel from the group Nitredy, Clive Mono Mkundu played the guitar, Maskiri and Tony G.
Both of Diana’s parents were involved in traditional choirs.
Diana is possibly 2BG’s most active member who, apart from music has also made other news. Just as controversial as any other youthful urban groover, Diana surprised many when she claimed that James Chimombe appeared in her dream asking her to do a rendition of Uchandiramba.
As for the agreement with Freddie Chimombe on the use of Zvaitika I know for certain that the Chimombe family was not happy.
James Chimombe’s wife and his daughters said the deal between Diana and Freddie was fraudulent. And that Diana took advantage of Freddie’s illness.
Controversially, Diana later said in an interview that the late singer James Chimombe had visited her in a dream where he asked her to help revive his musical legacy.
Her version of Chimombe’s Zvaitika is a catchy house tune.
Posted by wonder at 02:37

So what happened to Keven Ashley?

what happened to Rutendo's Career

For Rutendo i once heard that the hubby didnt like her to continue with her music career. Nice piece. 2bg is one of the best urban grooves groups