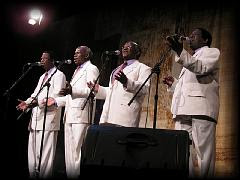 I was 19 at the time (in 1953) and I kept our money in the pocket of my jacket. We had raised about £75 from the shows. Dorothy (Masuku) and Steven stole the money one day and they fled to South Africa leaving us stranded in the capital - Timothy Sekane on when Dorothy ran away to SA

I met the grand old men of township jazz, the Cool Crooners, in 2004 at the Monomotapa Hotel. They were in Harare for the International Jazz Festival.
I was struck by their humility and openness despite the newly-found fame they were enjoying. At the time, Ben Pula Pulani who was an instrumental member had just passed away.
They were booked on the sixth floor where I met Abel Sithole and Timothy Sekane. In about two hours, the two took me back to the 50s when they were growing up in Bulawayo; their participation in the war of liberation and the great musical comeback.