Andy Brown is always angry - maybe with the media 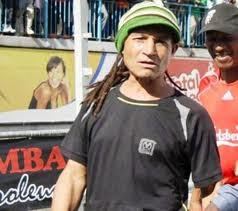 Those guys are dead. Do you think I can bring them back (pause) I don’t understand you guys. Some of you are talking about reviving the group? How can I revive a group with dead people? - Andy Brown on Ilanga

Andy Brown is an angry man. He does not waste time in advancing towards you when he feels threatened.
When I was researching on Ilanga in early 2004, I called him for information since he was one of the group’s founders.
“What do you want?” I recall him asking.
I told him I was working on a story on Ilanga for the Standard newspaper.
“So what do you want me to do?” He asked further.
I told him again that I wanted some information on the group.
“Those guys are dead. Do you think I can bring them back (pause) I don’t understand you guys. Some of you are talking about reviving the group? How can I revive a group with dead people?”
He scared me and I hung up.Surprisingly, I had not spoken about an Ilanga revival.
The next encounter was Hatfield. I had joined the Herald then. He had just been released from a Kariba prison for evasion of maintenance. His long dreadlocks had been shaved off. I had done the story but I wanted to interview him about his daughter’s success in the Music Crossroads music competition.
He rubbed me the wrong way again. “You always look for negative things,” he charged. “I don’t give a damn who you are and where you from. If you write fuck about me I will fuck you!”
I immediately made a u-turn and disappeared.
But there were times when Andy would be nice. Like the days when The Storm, the band he formed when he broke away from Ilanga wad doing well. Those days when he used to be backed by Chioniso Maraire and the late Mandy Chibindi.
I recall vividly the day in 1998 when the Pied Pipers launched their album at Harpers at the Oasis Hotel in Harare. We sat there, Obert Mandimutsira (who used to present news), Comfort Mbofana and others drinking. We also spent the night laughing our lungs out from Andy’s jokes.
Somehow, he changed becoming aggressive towards the media especially after the Hondo Yeminda songs.
Andy, who was born of a German father and a Zimbabwean mother, grew up herding cattle and goats in Mberengwa, Midlands Province before moving to Gutu in Masvingo.
He apparently nurtured his career while herding cattle and goats but pushed it further when he relocated to Bulawayo for his secondary education after meeting the late Jonah Mtumwa.
After school, he had a stint with Ebony Sheik before meeting Gabriel Green with whom he started the group Pisces so named after their zodiac sign in 1980.
Three years later, he left for Harare where he hung out with Rosalla Miller and Boykie Moore who later became members of the group Grabb! The group, however, disbanded in 1984 when Rosalla left for England where her career peaked while Andy went on to join the Rusike Brothers for a short time in 1985.
Then he met the late Don Gumbo and Brian Paul who inspired the formation of Ilanga that released two unimpressive singles – Thandiwe and Song of Africa - resulting in Brian’s departure.
It was then when the Barrel of Peace - Cde Chinx, Keith Farquharson and Joseph Mosias Munyaradzi Brown - merged with Ilanga.
Later Busi Ncube, Adam Chisvo and Virgillio Ignacia also joined the group. Playing lead guitar and on vocals, Andy featured prominently on Ilanga’s albums Visions Foretold and Silver and Gold that are still as fresh a sound today as they were more than 10 years ago.
But Ilanga was a star-studded group whose members felt they could do better and more when they pursued solo careers.
Andy was the first to leave and founded The Storm after roping in Chiwoniso Maraire and the late Mandy Chibindi as dancers, and Ian Hillman as bassist among others.
The inclusion of Chiwoniso who plays mbira and who later became his wife (now divorced) brought the distinct mbira sound to Andy’s beat.
His debut album titled Storm came in 1989, Chimvuramabhwe was released in 1990 and Feed Me was his last in 1991 before taking a break when he left for South Africa where he played as a session musician for a number of artistes including the South African reggae star Jambo.
On his return four years later, Andy relaunched his career in a big way and released six albums in the following six years. In 1998, he helped Chiwoniso to record her debut album Ancient Voices.
During the farm invasions of 2000, Andy was part of the More Fire Crew that worked with the Ministry of Information and Publicity in the President’s Office in the campaigns that followed.
To some extent, his involvement with the land invasion campaigns took a negative toll on his career that briefly took a rest for four years after the release of the album Tongogara in 2001.
Currently, Andy is slowly returning as shown by the release of his album “Chiedza” in 2005 and his tour of the United States of America and various appearances at musical galas held in the country.
Posted by wonder at 01:10