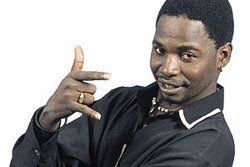 I am trying to tell people to get on with their own lives and not gossip -just do your own thing. - Amon Mvula

Amon Mvula was known for his bicycle wheel acrobatics and had stints along Harare’s First Street Mall before joining music groups as a dancer.
He worked with Alick Macheso in the 90s during the early days of Khiama Boys and was a cousin to Nicholas Zakaria.
In South Africa, Mvula worked with the likes of Peta Teanet, Penny Penny and Ebony.
Mvula who is now late later became a double South African Music Award winner and performed alongside Oliver Mtukudzi.
Amon’s music was fusion of Zimbabwean rhythm and Venda lyrics.
Many described him as a fun loving traditionalist who combined his singing and song-writing skills with his trademark ‘bicycle' dance, whereby he spun a bicycle wheel on various parts of his body including his hands, belt buckle and face, making his performances energetic and well-loved.
Born in the rural town of Kadoma Amon Mvula was born to a Zimbabwean mother and a Malawian father.
From an early age he was further exposed to cultural diversity, attending school in Zimbabwe, where his father worked on the mines.
Amon was one of very few Zimbabwean musicians to break into successfully into the South African market because he spoke 11 languages.
"The people in the north have come to expect this from me," he said when he released his sixth album track Zwitshele which literally means gossip Venda. "I am trying to tell people to get on with their own lives and not gossip -just do your own thing."
He was very concerned with the welfare of women as shown in one of his songs Tshililo which talks about the issue of women stuck in abusive marriages and was also concerned with responsibility.
"I want people to have fun and enjoy themselves but not without being responsible. I dont want people to think that unprotected sex is fine," he said.
Since Amon started as a dancer, he said his favourite song was Tshinai, which is about all the different styles of dancing and how we should embrace them all as part of our culture.
"Everyone has their own way of getting the rhythm and people should dance the way they feel like."
One of the people he worked with, Thabo Mosia, said about Amon was ‘the only person who can really make me sing. He brings out the artist in me and lets me express myself’.
He was a man with incredible energy and personality and the ability to lift up the energies of those around him with his large grin and his positive way of looking at life.
An unusual stage act made him renowned for being more than just a performer, but a real entertainer. He was known as one of the best drummers in South Africa.
Amon died of pneumonia in 2007 at the age of 36.
Posted by wonder at 20:35

My name is wandy shilowa, staying at Johannesburg in Alexandra town ship as my work place,I live at Selwana villge in phalaborwa. Amon mvula he was my best favourate. Expecial his Makorokoto 4 album. We are lost in Africa
O