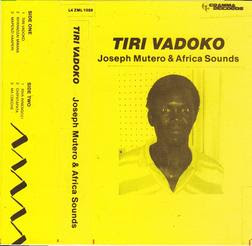 There were times when getting information on a musician or group was hard but there were also times when a lone musician seeking publicity would pass by. The story of Joseph Mutero, who gave us the song Mutongi Gava, came that way. I had not heard about Gift Amuli but he came by and I listened to his story and here is Joseph Mutero’s story which is intertwined with that of Amuli, a sungura artist on the rebound.

When the history of Zimbabwean music is told, the role played by Mashava and Shabani Mines in nurturing talent will certainly be part of it.
From Mashava came Devera Ngwena in the early 70s and until now members of the group who have gone their separate ways are very active in music.
And from Zvishavane came Zvishavane Sounds, a six-member' outfit that was led by the late Joseph Mutero whose song Mutongi Gava was a mega hit in the 90s.
Formed in the 80s' as part of the mine's social responsibility, the group's performance was confined to the four bars that were run by the mine as well as playing during functions held at Zvishavane Mine.
The six - Mutero, Njira Tengani, Tito, Ncube, Kelazi Osborne, Davison Matsheza and Gift Amuli - were fully employed as musicians.
The mine provided musical equipment and paid for the recordings while the group was barred from playing outside the mine.
Like Jonah Moyo, Mutero left the mine in 1991 to pursue a solo career after a salary dispute with management.
But unlike Moyo, Mutero did not take along the name but formed his own group, the African Sounds, with whom he released the album Tiri Vadoko before his death three years later.Trevor Madamombe – who also died in 2000, replaced Mutero.
After Mutero’s departure, the group recorded four albums. Remekedzai Hupenyu that carries the tracks Ndiri Muranda, Chitototo and Ruchiva came in 1995 while Kudzizisana hit the streets in 1996.
A year later came Makomborero and Mushengenene, an album named after one of the popular beerhalls in Zvishavane’s Nil Township where the group played.
Soon after the recording of the group’s last album, Tito Ncube and Kelazi retired on medical grounds and inexperienced members who included Tafara Maeresera and one Tony and Marikopo were taken abroad.
In 2001, new management came and conditions of work for the musicians changed. This time they had to undergo training in any one of the mine’s departments. It meant that they were going to be part-time musicians and fulltime workers.
This was done because the mine could no longer sponsor the group and the members had to work and earn a salary.
But the mine undertook to provide a rehearsal room and still give the group a musical kit to enable it to play as usual in the bars and during functions.
One of the original members who took up training as an electrician is Gift Amuli who had played with the Zig Zag Band before trekking down to Zvishavane for auditions when the band was formed.
Amuli and Davison are the only surviving original members who saw the group they had worked for and helped to grow dying a slow death. In 2002, Amuli had a solo project with the backing of the members of the group using mine equipment.
The project, a five-track album titled Wedangwe, did not do quite well despite shooting a video for the song Wangu off the album.
When Amuli left the mine’s employ in 2003, all the equipment was locked up and Zvishavane Sounds ceased to survive.
Amuli, who returned last year from South Africa where he was working, has a new set of equipment and a brand new album titled Munozvigona Sei? which hit the market on Monday this week.
He has also teamed up with Davison to revive Zvishavane Sounds.
Maybe better days are coming for the duo.
Posted by wonder at 12:47