God gave me back my sight - David Mabvuramiti Matavire's replacement 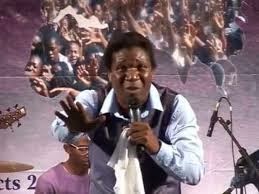 I never thought miracles happen until I met David Mabvuramiti, the blind singer who replaced the late Paul Matavire when he was jailed for rape. I had last seen him at a show in Gweru three years earlier where he had dark oversize goggles. But when I met him in Harare, he had no goggles and walked without help.He proudly told me that God had given him back his sight - Wonder Guchu

Pastor Bethel Gwarimbo the host of a popular programme on ezekiel tv channel known as Ezekiel TV Mailbox, had a life changing interview with pastor David Mabvuramiti on Mailbox 2011. Pastor David gave his testimony of his healing from blindness, many viewers where healed while watching.

Where can I hear the song Chikomba Muwadhiropu? It's not on youtube and I can't find an entry on Discogs to research it