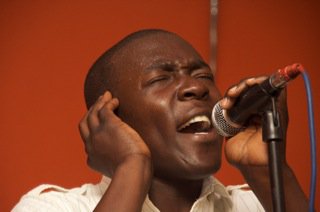 The closest I came to rubbing shoulders with Alexio Kawara was during the Nama awards ceremony at the 7 Arts Theatre in Avondale in February 2007 when he walked away with two awards.
A month earlier, Alexio Kawara had scoped two awards during the Zima awards. Alexio Kawara is probably one of the very few urban grooves artists still going strong today.
This lasting power has been attributed to his versatility and use of live instruments to appeal to a wider audience.
Born on November 28, 1978 in Harare, Alexio attended the local school, Shiriyedenga Primary School from 1985 to 1991, before progressing to Mazowe High School from 1991 to 1995, and Vainona High School for his A Level. His inherent love to serenade pulled him in the Choir since primary school to A Level, but not even in his wildest imagination did he think he would be a fulltime musician.
He went on to study for his Advanced level certificate at Vainona High School and his passionate affair with music continued even then.
He started off at primary school entertaining his teachers and other pupils in Harare’s high density suburb of Glen Norah and when he went to Mazowe Secondary School he befriended two boys who would become some of Zimbabwe’s notable musicians. These were Zivanai Masango who had a stint with Thomas Mapfumo and Zimbabwe Republic Police Band member Watson Chimombe.
When they left Mazowe, together with Joel Zamani, they formed Black by Nature, a gospel outfit. After Black by Nature, Alexio was invited by Delani Makhalima, Brian Garikai and Donda Khumalo in 2000 to join the group ?uess at Galaxy Records.
They recorded together a couple of singles including Amai, which topped the charts for almost a whole year. The group also performed at the closing ceremony of the Harare International Festival of the Arts (HIFA) in May 2000.
In 2001, Alexio recorded a solo album, Usazondisiya, with Shamiso Studios after the disbandment of ?uess and the closure of Galaxy Records.
Some of the songs on the album were Ndinomhanya, Kumba Kwenyu, Mandigura Kunorira and Chemera Jesu.
His second album, Rwendo Rwangu, came in 2003. It was more mature with its afro-jazz feel such that Chibvugubvugu track made it across the borders into Zambia, Botswana and Malawi.
Alexio did not release any album in 2004 but made a huge come-back in 2005 when he launched Pfimbi Yangu (My Secret Place) which was produced by Macdonald Chidavaenzi (MacDee) who is one of Zimbabwe’s greatest producers. MacDee won the Zima 2006 Producer of the Year.
Pfimbi Yangu was recorded at Shamiso Studios where Alexio met Ernest Manandi (Nesto) who also helped on the album apart from Tererai Mugwadi, the Zima 2005 Best Female Urban Groover, who featured on the track Tinodanana.
As a result of these collaborations, 2006 ended on a high note for Alexio who scooped two Zima Awards among them the Best Urban Groover and Song of the year. He was also was the star for the year when he took home two awards at the 6th Nama edition at the 7 Arts Theatre in Harare.
He has since featured Oliver Mtukudzi in some of his songs as well as Clive Mono Mkundu, former guitarist for Mtukudzi’s Black Spirits.
What I remember vividly was how Alexio Kawara hugged his mother and thanked her for not giving up supporting him.
‘When I don’t have money for bus fare,’ he said in his acceptance speech, ‘she gives me. She has not given up on me.’
One of the songs that won him a 2007 Nama award in the Outstanding Song category, Tinodanana, Alexio Kawara collaborated with Tererai Mugwadi who was also present at the ceremony to receive the award.
I recall writing two stories on his Nama and Zima successes.