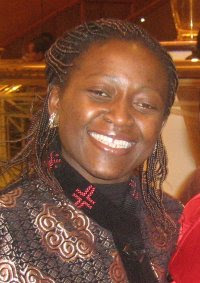 Shingisai Suluma was accompanied by her husband, Steven, when she came for the interview in October 2005. Just then her album Tatenda Taona released in 2004 had peaked at number one on the radio charts where it held on for 20 long weeks.
Tatenda Taona was her sixth album after Zvanaka (1995), Huya Ishe Jesu (1998), Mumaoko (2000), Nokuti Wakanaka (2002) and Fara Zvakadaro (2003).
Both Shingisai and Steven are soft-spoken. We sat in the Herald’s conference room, a big cold room where editorial meetings are held.
I learnt on the day that Shingisai had been condemned to death by her doctor and when she got off the claws of death, she penned all the songs on the album Tatenda Taona.
“I wrote the songs on the album after coming from hospital,” she told me, “The song Tatenda Taona is basically about my gratitude. I am saying we have seen your power and we are grateful.”

Below is the interview:

There is something universal with music, love, pain, laughter and death.
When music is played in a foreign language, it arouses interest in people who do not understand a single word of the language. That is the same with emotions when two people from different cultures or races meet. That too is the same with pain – everybody feels it.
People weep when they lose their loved ones. They all laugh when something humorous is said and they all tap their feet or nod their heads when a gospel track is played.
While Zimbabweans may not know what inspired Shingisai Suluma to produce her latest album, Tatenda Taona, it is clear from the response the album is getting that they feel the same way she felt when she sat down to write the songs.
“I wrote the songs on the album after coming out of hospital where doctors had condemned me to death. But God raised me from the dead and gave my life back to me.
“Most of the songs on the album are, apart from thanking God, celebrating my decade off making music. I was passionate when I wrote all the songs on the album,” she said.
For Shingisai making an album is not a one-day affair, “It takes a lot of time, commitment, creativity, personality and individuality to make a quality album. For me, it means thorough preparations which start with writing songs. I think my style of music makes me appear mature. It is slow and infectious.
“When compared with others, my style is similar to country music while others play gospel linked to sungura or kwasa kwasa,” she explained.
She said her music is original because she composes it unlike others who are still stuck in borrowing from hymns and dirges.
“Other gospel artists are still borrowing from hymns and dirges but my strength comes from my originality and creativity. I also believe that sticking to one album per year pays,” she further said.
Her musical career started in earnest in England in the early 90s where she had gone to study for BA Honors in Art and Design.
“Although I come from a musical family – my parents used to sing in the church choir – I was not interested in music when I was forced to sing in the choir.
“In England, friends whom I sang in the choir with recognised my talents and encouraged me to take up music full time. I did and recorded the album Zvanaka while I was at college. It was not popular probably because of poor marketing,” she said.
When she returned to Zimbabwe, Shingisai did not give up, instead she formed the 16 member Joy Street Choir to help her revive the England dream.
Together with her husband, who engineers, produces and shots her videos, she started slowly to climb the musical ladder.
“It was not easy when I did my second album Huya Ishe Jesu since we had to record it elsewhere and find other people to do everything for us.
“Record companies had no confidence in us and as such were not interested. It was only after the success of Mumaoko that they started showing interest and the desire to work with us,” she remembered.
The popular track Mirira Magwanani is taken off the album Mumaoko.
Today, Shingisai is lucky to have a studio in her home where she does all her recording as well as help others to realise their dreams.

About Shingisai
Shingisai was born into a musical home. Her father was a pastor. By the age of eight she had already joined her family singing in church.
By the time she turned seventeen Shingisai was leading the church choir in praise and worship. She knew she was called to be a worshipper. With her two sisters Tutsirayi and Nyasha they formed an acapella trio and performed at several concerts and church functions.
Shingisai recorded her first album in England where she was studying for her first degree, in 1995. That marked the beginning of greater things to come.
Shingisai married Stephen Suluma who is her music director and producer. God has blessed them with two daughters Tashinga and Tiara. Tashinga loves to play the keyboard. By the age of 7 she was performing at school and church. Tiara has already started singing praise to God.
Shingisai has recorded eight albums and has won several national awards in Zimbabwe. She is currently living with her family in the USA and studying.
Recently Shingisai and her team realised that many people are failing to access her music. They decided to transform their ministry into a listener supported ministry. Downloads of her music are available free on this website. They displayed confidence in you the listener and supporter of her music that the ministry can be sustained by your voluntary contributions. Please partner with them and make a contrubution towards this great work.