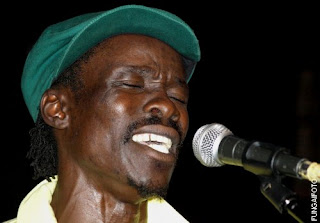 Mateo Kaunda, Patience Musa and Willom Tight who made up the Mateo & Friends outfit met at comedian Edgar Langeveldt's Nexus Talent Agency in the late 90s. Willom, who was a member of the Zim Jam group together with Langeveldt, hung around; Patience had come to the agency in a bid to refine her voice while Mateo came in search of backing vocalists after a stint with Albert Nyathi in 1993


I first met Mateo Kaunda & Friends when I was writing for the Masvingo Tribune, a provincial Daily News sister paper in the late 90s. It was during an Artists Against Poverty Campaign show ran by Daves Guzha’s Rooftop Promotions.
There was a concert in the Harare Gardens and I spoke to Mateo who at the time was riding the crest of a success wave. Of course, I had seen him in Budiriro One before passing.
At the time, he was performing alongside Willom Tight, Patience Musa, Jimmy Buzuzi, the late Sanchez Fred Allan and Walter Paradzai.
They had also just released their album Asambe Africa that was making huge waves on the local music scene. I recall writing that the youthful group was going to be Zimbabwe’s best performers.
I was wrong and I was right. Shortly afterwards, the group split. The rest dumped Mateo. I was right because Patience and Willom are still into music while Mateo has been forced to give up because of illness.
One day I gave Willom a lift to Budiriro One in 2000 where he once stayed. I took the opportunity to ask him what had happened. His words: ‘Akakura musoro patakapihwa Z$20 000. Akatanga kusauya kuma-rehearsals . . .’
I also boarded the same bus from Bulawayo with Jimmy Buzuzi once and he repeated the same about Mateo.
Then my last meeting with Mateo was at Simon Chimbetu’s funeral. They were staying in the same neighbourhood in Mabelreign. At the time, Mateo was slowly losing his senses. I gave him a lift into town. All the way, he was talking incoherently. He even offered me his fridge for sale.
Then I later heard that some people knocked out his front teeth when he tried to be funny during Chimbetu funeral in Chegutu.

They made today’s beat yesterday

They almost became Zimbabwe's first ever session musicians to hang together for years and make music that can be described as today's beat that was made yesterday.
Calling themselves Mateo & Friends Mathew Kaunda, Patience Musa, Wilbroad Muponda (a.k.a Willom Tight), the late Sanchez Fred Allan, Jimmy Buzuzu, Walter Paradzai and Conrad Masimba - young as they were experimented with and successfully produced a unique afro-soul beat that still sounds as new as it was during its release years ago.

When the three main members - Mateo, Willom and Patience - went solo, none has ever managed to produce that calming and comforting beat as heard on Vanodana or Pamuhacha.
It was a beat born of Mateo's soul, Willom's ragga and Patience’s jazz.
Of course, they have gone on to be stars in their own rights but not stars in the mould of the afro-soul beat that for a short time was the beat Zimbabwe had lacked.
And none can claim to have become more successful as a solo artiste than the grouping that almost made it big after meeting at Edgar Langeveldt's Nexus Talent Agency in the late 90s where Willom, who had been a member of the Zim Jam group together with Langeveldt, hung around.
While Patience Musa had come to the agency in a bid to refine her voice, Mateo came in search of backing vocalists after a stint with Albert Nyathi in 1993.
He had also played with Muzi Mangena and Prudence Katomeni and had released a debut album titled The Music with backing vocals from Alice Mtwalo and Jane Harid.
These also helped Mateo on his next album Wada Rugare.
Then came the big break when he rubbed shoulders with Zimbabwe's greats - Oliver Mtukudzi, Mechanic Manyeruke among others - during HIV and Aids campaigns.
After this experience, Mateo then unleashed Mateo '96 but for his next project, he had to scout for talent and this brought him to Nexus Talent Agency.
Willom Tight was already there at the time. He had tried his luck with the Bissas Combination in 1993 before joining Langeveldt to form Zim Jam.
When he met Mateo, Willom became the rapper he was looking for and their combination worked as seen and heard on the albums Impressions of Africa Vol. 1 and 2 as well as on Asambe Africa.
Asambe Africa was a soulful tune that captured the true African sunset scenes when herd boys drive their cattle back home from the grazing fields and the sounds of crickets in the night as lovers sit under muhacha trees back in the countryside.
It also captured the joys, the laughter as well as the agonies of growing up.
There was Mateo's voice crooning and there was Willom's rising and soaring above Patience's mellow voice that seemed to melt with each chord.
But in 1999 the friends decided, after their successful Ray of Hope Campaign that saw the release of Tariro Iripo/ Ithemba Likhona album, to tread different paths with Willom releasing his debut album Ndinoda Wangu two years later, which he followed with Hodzeko and then Sweet Stupet.
While Ndinoda Wangu was a hit both on television and the market, it was however, the only hit Willom has had.
Maybe, to prop himself up, he teamed with Dino Mudondo until early this year when the two parted ways. During the time Willom worked with Dino, he produced Sweet Stupet that was nowhere near Ndinoda Wangu and Asambe Africa.
Mateo on the other hand trudged on releasing lacklustre material in the form of Mateo Collection, and Ngoma Mafaro.
Only last year, Mateo produced Hazvisi Nyore that was closer to the stuff he used to dish out during their days as Mateo and Friends.
Patience, who started her career when friends introduced her to Prince Tendai, has not been doing much either.
Her musical journey took her to Prince Tendai who then introduced her to James Maridadi who was then a Radio 3 DJ.
When nothing materialised, she ended up at Nexus after which she teamed up with some girls in a group known as Ashviller that, sadly never got to perform anywhere.
Then along came Mateo and then Asambe Africa and now after the decision to part ways, the Other Four or better known as Patience Musa and the Other Four that had the late Allan, Buzuzu, Paradzai and Masimba
Her debut album was Zviri Nani 2003 and she has a second album but all is low key.
At least Patience is still doing the club circuit while Willom, who has just parted ways with Dino, is understood to be taking a rest.
While people cannot be forced to stick together, one feels it would have been better if they had stuck together?
With them gone the way they have, that afro-soul beat has also gone - dead.
Posted by wonder at 08:07

Informartive. What about Mateo's last album Simply Mateo which featured the song Waenda ehich he featured Patience.Willom Did Hodzeko which had two hits Wangu Zvangu and Waya Waya though it waa not close to Ndinoda Wangu. Also i would like also to jnow if Asambe Africa was produced by Fortune whom i remember featured on the video