The only female band, Maita, went the same way - dust 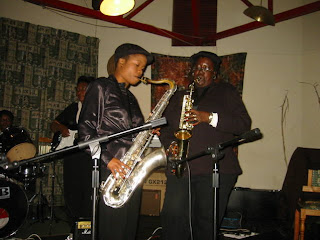 I stumbled upon Maita Jazz Band, an all-female band that was formed at the Zimbabwe College of Music when I went to see mudhara Friday Mbirimi for a story that later cost him his job as the acting principal of the college.
The story was about the state of the college – aging instruments and a lot of stuff. The Board decided to hang him for giving me the story.
When I later called, a week later asking to talk to Mbirimi, I was told he was not longer with the institution. No reasons were given then but when we met at Jazz 105, he told me the story had cost him his job
Am sorry Mudhara.
But this is supposed to be the story of Maita Jazz Band. The women told me that they were here to stay and prove that female artists should not be like the late Katarina who were reduced to dancers.
I believed them but today, I can’t see or hear from them. They went the same way others went – dust.

Sometime in 2003 seven women who were students at the Zimbabwe College of Music in Harare came together under the auspices of the college and the Swedish Embassy and played as a band.
The women, whose ages were between 20 and 40 then, initially played as a loose grouping of people who loved jazz before they realised that they were just as good as any other jazz band. They then settled on the name Maita which means Thank You to the Swedish Embassy for making a dream come true and another thank you to the College of Music for nurturing them.
Susan Ndawi (drums), Shamiso Chitsinde (bass), Anna Matondo (rhythm), Stella M'kundu (lead), Marita Thfirenyika (keyboard), Dadirai Manase (saxophone) and Victoria Zimuwandeyi (saxophone) took the Harare club circuit by storm when they played at Taste of Afrika, Jameson Hotel, Sports Diner and the Reserve Bank Sports Club.
The birth of Maita Jazz Band marked another turn in the all-male jazz music industry because for once, here was a group; which unlike many other females in the industry played no second fiddle to any one.
In an interview two years ago, Dadirai said that they did not; want to walk in the footsteps of talented 'females who became nothing but dancers in male dominated music groups.
"We are tired of being like the Katarinas (the late Elizabeth Taderera). We want to make a change and we have done so with a great impact. It's time women realise that there are no limits except fathering a child," Dadirai said at the time.
"We are confident we will make a change. We need all the support that we can get. Our hope is to play alongside Abdulla Ibrahim, Earl Klugh, Hugh Masekela and Miriam Makeba," she added.
At the time of the interview, five members of the group were full time musicians while two were in employment - one was a teacher while the other one was a dental nurse.
"We are indeed a white elephant here in Harare and the whole of Zimbabwe. We are the only female Jazz band around. It feels good and bad. Good we have done it as women and bad there is not enough of us considering that we women are more than men in population but we hope the imbalance will be rectified in due time. We hope to take the idea to the girl child at a very early age," Dadirai said.
That dream and those hopes, it appears will no longer come true because Maita Jazz band has been inactive now for about 10 months,
Dead too is the group's desire to reach out into the remotest parts of the country with the intention of assisting the underprivileged girl children.
Dead too is the group's desire to end the male domination of jazz music in Zimbabwe.
Dead too is the group's tour that had been scheduled for October 2004 when the group was the hottest and sought after entity in the capital. Even the tours to Europe and America are a dead dream.
It's not even clear whether the group managed to record their albums - the debut that was supposed to have been on the streets in October 2004 and a second one that had songs composed to educate people about HIV and Aids.
The group no longer plays at the Sports Diner where they had set their base.
Nothing is being said about Maita Jazz band today and we wonder whether their case is another case of a rain cloud that could not give rain.
Posted by wonder at 05:52