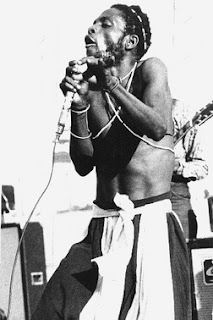 I was a small boy in 1975 when the war of liberation was at its height. In our area, Chiweshe, we were in keeps or protected villages. Ours was Keep 15. There were loud speakers put up by the Ian Smith regime to keep us entertained. So most weekends, especially Saturdays young people would sit under a pole that carried the speaker listening to the Rhodesian Broadcasting Corporation’s Weekend top 10.
That is how I first got to know about Tineyi Chikupo. It was his songs Chamunorwa (Rega kurova amai) and Slyvia Hande Kumagobo which awakened me to the reality of war going on out there.
Later, when I was in Mvurwi I attended one of his shows. I remember how dressed in black and white traditional attire, Chikupo would perform like a possessed man.
When I thought of doing his story, I spoke to the people who knew him well. One of them was the late Cephas Mashakada. The other one is Nicholas Zakaria who remembers meeting Chikupo. Mashakada said Chikupo was a regular winner in the best musician of the month competitions that were held at Rufaro Stadium where groups performed and then at the end the best group was chosen. "On three occasions, Chikupo was number one ahead of Oliver Mtukudzi, Thomas Mapfumo and even Zexie Manatsa.”
What I came up with was that Tineyi Chikupo died a disgruntled man.
He was one of the very few Zimbabwean musicians who were bought a house by Gramma Records for being a best seller. Then he lost the house, fell into heavy drinking and died a sad man


The year 1975 is a long way back, but surely those who followed music then should be familiar with the songs Kapfumo Kandibaya, Mhuka Ine Mavara, Sirivia Hande Kumagobo or Chamunofwa (Rega Kurova Amai).
All these compositions carried revolutionary messages.
Kapfumo Kandibaya referred to the bullets that struck down innocent people during the liberation war while Mhuka Ine Mavara was a derogatory term used to describe the camouflaged Rhodesian soldiers.
Then there was Sirivia Hande Kumagobo, a call for taking up arms that was sent out to the 'boys and girls who would later cross into either Zambia or Mozambique where they received military training after which they returned home to fight the settler regime.
Chamunorwa (Rega Kurova Amai) was a song that urged the black soldiers within the Rhodesian army not to harass innocent village elders who were just as good as their biological parents.
Hama Dzapera was about the massacres that occurred both, in Zambian, Tanzanian and Mozambican refugee camps - Nyadzonia, Chimoio, Tembwe and Mboroma - where Zimbabweans took shelter from colonial oppression.
All these songs peaked at number one on the then Rhodesian Broadcasting Corporation (RBC) and were chanted by both the guerillas and collaborators during the war.
Delivered with passion, the shriek and emotionally-charged voice behind these songs had the power to stir anger within the youths in the war-ravaged Rhodesia.
So if those from that era remember these songs, surely the name Tineyi Chikupo should not be new.
Son of a Murehwa rainmaker, Tineyi Chikupo emerged onto the music scene at the same time as Oliver Mtukudzi, Thomas Mapfumo, Zexie Manatsa and many other groups.
While Mtukudzi was singing Dzandimomotera with his Wagon Wheels, Chikupo was already urging and reminding people about the war in his 1976 song Kapfumo Kandibaya.
One great musician who met Chikupo in the 70s when he 'was playing with the Mawonera Stars together with Morton Dzumbunu remembers:
"I recall meeting Chikupo on farms in the Mazowe area. His band used to perform where I stayed. As a group of youths growing up then, we had our own group but had no instruments.
“So we would ask Chikupo and Morton Dzumbunu, who were leaders of the group, to allow us to have a feel of real instruments,” Nicholas Zacharia recalls.
Dzumbunu is believed to be staying somewhere in Chitungwiza and is now a follower of an apostolic sect in the town.
Later, Mawonera Stars was to be called Mverechena Jazz Band after Mverechena Hotel in Domboshava had taken over as the group's management.
It was during this time that the late John "Mr Chitungwiza" Chibadura joined the outfit as a vocalist.
He subsequently left after being called to lead the Sungura Boys at Mushandirapamwe Hotel in Harare.
Marshall Munhumumwe, who had been playing with other groups in Harare, moved down to Domboshava where he joined Chikupo.
Munhumumwe was to later return to Harare, taking with him three other members to team up with the Great Sounds.
Left on his own, Chikupo started his own band, the New Mother Band, with his wife Patricia, who is believed to be in Bulawayo.
Cephas Mashakada, who played with Chikupo years later, recalled that the New Mother Band was a family affair.
"Chikupo managed his group with Teal Record (now Gramma) providing instruments in the late 70s. Then he used to stay in Mabelreign in a house provided by the recording company. It was a beautiful house with a sliding gate," reminisced Mashakada.
The paunchy lead guitarist also recalls Chikupo being a regular winner in the best musician of the month competitions that were held at Rufaro Stadium where groups performed and then at the end the best group was chosen.
"On three occasions, Chikupo was number one ahead of Mtukudzi, Mapfumo and even Manatsa," said Mashakada.
Both Mashakada and Zacharia recall Chikupo's stage attire.
"Chikupo used to wear a black and white skirt when on stage. It was something else. It aroused a feeling of respectability" added Zacharia.
"He also wore beards. In fact, his father would always shower him with more of them when he attended some of his shows. I remember one time at Rufaro; the father gave Tineyi some beards when he was voted the best musician…”
But somehow, Chikupo’s fortunes started dipping. The Mother Band disbanded, the recording company repossessed the house and the instruments were sold to Muddy Face Band.
Chikupo went on the road. His first port of call was the Vhuka Boys, where he joined Zakaria and Shepherd Chinyani.
When Zakaria left the Vhuka Boys and formed Khiama Boys, Chikupo moved briefly before he went to join the Muddy Face as the lead vocalist.This was between 1982 and 1983.
For short stints in between, Chikupo played with the Mafia Connection and then with the late Susan Mapfumo and her band, The Boogaloos.
With the Muddy Face, he recorded Ndikafa Ndichaenda Kumakuva and Tozivepi Shamwari Yangu. He then returned to Khiama Boys with whom he performed until his death in 1992.
"He died a disgruntled man, “Mashakada said.
"He had turned to drink. As a result, he would sometimes behave as if he had lost his mind.”
Posted by wonder at 07:16

Thank you very much for this insight on Tineyi Chikupo. After following his music (on radio) since the '70s, I was finally rewarded with seeing him perform live in Wankie Stadium, mid-'80s. If my memory saves me right he was with the Muddy Face. The show started late afternoon. Late evening rain started falling. What remains in my mind is seeing him being pelted but not deciding to put on something to cover his torso. That is the lasting memory I will always have of our icon & legend. Please continue sharing with us more information about our music greats. Thank you again.

Thank you very much for this insight on Tineyi Chikupo. After following his music (on radio) since the '70s, I was finally rewarded with seeing him perform live in Wankie Stadium, mid-'80s. If my memory saves me right he was with the Muddy Face. The show started late afternoon. Late evening rain started falling. What remains in my mind is seeing him being pelted but not deciding to put on something to cover his torso. That is the lasting memory I will always have of our icon & legend. Please continue sharing with us more information about our music greats. Thank you again.

I had the privelage of watching this maestro play with the Mawonera Superstars at the Showground in Chinamhora during the opening of the Chinamhora Council offices in 1977 at the height of the struggle to liberate for the now Rhodesia Ruins, I disagree with you whenhe say he was ahead of Thomas Mapfumo, not a chance at all. My opinion tells me no one has ever been ahead of Thomas Mapfumo they have always followed behind him. Tineyi was great but not that good to put Mukanya in his shadow

I never saw the war (Chimurenga) but listening to Chikupo's songs, I see a man who made such contribution towards the cause of the struggle.
He falls within the ranks of Tuku.