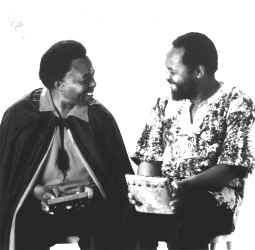 This is the second in the Maraire Trilogy. It's the story of a family that brought mbira music to the world.Dumi showed the world that mbira music is peaceful and unifying. Today, some of his students across the world and across the colour, race and religious barriers are following in his footsteps. Like he used to say: Let the spirit be upon the people . . .

I met Dumisani Maraire for the first time in 1998 just a year before his death and a year after his wife’s death. He was a lecturer at the University of Zimbabwe then. It was at the Alliance Francaise in Harare. He was a proud father since his daughter Chiwoniso was launching her debut album that had won her an international award.
I had heard and read a lot about Dumi. Being a rooky in the media and working alone, meeting the man who colonised the Americas with a simple musical instrument was a great honour.
Dumi was a simple man himself. Short and spoke with ahorse voice which could, maybe, have been a result of years of singing, his hand shake was firm. He had this thing of peering at you while humming under his breath.
An unassuming man whose traditional life was not tainted by his stay abroad, Dumi believed in unity – family I suppose and his famous saying was always: Let the spirit be upon the people, so that we can all move together.
And he made it happen for Zimbabwe when he spearheaded the introduction of the ethnomusicology programme at the UZ as well as the creation of the College of Music.

But who can tell his story better than his son, Baba Tendai Maraire?

Dumisani Abraham Maraire was born in the small village of Chakohwa inZimbabwe, to the parents of Dikani and Nozipo Maraire. Dumi was introduced to music at an early age. As he got into his late teenage years Dumi began to pursue music more seriously. By the time he was 21 years old, Dumi had already written two musicals, arranged and composed music for the United Methodist Church in Zimbabwe and conducting musical choirs in his community. This is when Dumi was discovered by Dr. Robert Kauffman. Dr. Kauffman discovered Dumi while watching one of his musicals that he produced. Very moved by the musical, Dr. Kauffman wanted to know the teacher who produced it. Later he found out it was no teacher, but one the students which happened to be Dumi. Dr. Kauffman then asked Dumi if he would be interested in teaching his music to others, while studying music in America. The rest, as they say, is history.
Dumi came to Seattle in 1968 to the University of Washington to study music. It was at this time Dumi would also go play his mbira at local open mic clubs in the area. His popularity grew very quickly, as Dumi would build a fan base for his talent at a time that the black power movement was on the rise. Soon Dumi would pack out pubs playing mbira for crowds of people who wanted to hear the sounds of the mbira, accompanied by his raspy voice. “What made these shows popular was that they involved crowd participation, so not only did you get to here him sing but you also joined in" – Lora Chiorah. In Zimbabwe they believe if you can walk then you can dance, and if you can talk you can sing.
In 1972 Dumi decided to expand his horizons and not just teach the music but to starta band. That's when Minanzi was born. Dumi put out a few releases earlier in his career, but all of those releases were on the mbira. This time Dumi got a group of his best students and formed Minanzi. The name of the release was "Rufaro", which was first available on vinyl in 1972. Minanzi went on to perform at several festivals and even went on tour in the United States. This album featured some traditional as well as contemporary Shona pieces. Dumi entrusted in the talent of the first Minanzi to come up with there own arrangement called "Mardi Gras". For those who still own the vinyl, hold on to it, it’s a classic.
Do to personal reasons Minanzi broke up and some years later Dumi formed his second band, The Maraire Marimba Ensemble. By this time Dumi was starting to build a grass roots movement of marimba that was to be the birth of Shona music's influence on western culture. This band went on to record Chiwoniso. This album would be the only one that Dumi would record with his wife Linda (Mai Chi). By this time Dumi was starting to peak with his style of composing. This album featured songs like "Kapotso" and the classic "Mweya" sung in Shona. By this time Dumi was on the bill to perform at such pubs as the Rainbow Room on 45th in the University District. You could almost guarantee a packed house.
By his third release and third band Minanzi III, Dumi had a cult following in the northwest that sung what we call here at Maraire Enterprises, the Maraire Marimba Movement. Soon people all over the United States were packing their bags to study with the God Father of Shona Music. What started out with one band soon grew to five, then ten, then twenty, until today where there are now hundreds on marimba groups around the world who can trace their roots to Dumi. This was the point where Dumi would give us his last marimba release, "Mweya", which is one of the most popular songs he created. This band went on to perform all over the United States and spread the music of the Shona people.

Abraham Dumisani "Dumi" Maraire, a dynamic musician who introduced Northwest and North American students and audiences to the joyful sound of African marimba music, died yesterday (Nov. 25) in his native Zimbabwe.
Mr. Maraire, 56, suffered a stroke.
His death has saddened members of the ethnic-music community in the Puget Sound area, where he was a beloved teacher and ensemble leader.
"When he was on stage, he would forget who he was because he put his whole heart into playing," said Lora Chiorah-Dye, a fellow musician and the mother of his first three children.
"He was so energetic and so charismatic, people would just jump up and dance. He hypnotized everybody with his music."
Mr. Maraire also played piano and guitar at home, and he loved the music of James Brown, Aretha Franklin and Roberta Flack.
Born in Mutare, Zimbabwe, and educated by family musicians and at his homeland's college of music in Bulawayo, Mr. Maraire was widely considered one of the masters of mbira music. The mbira is a thumb piano, usually made of hammered iron keys fixed to a wooden body, and can produce two or three melodies at the same time by a single performer.
Mr. Maraire was a visiting professor in the University of Washington's ethnomusicology department from 1968 to 1972. Composing in his native language, Shona, he specialized in marimba music, singing, dancing and drumming.
He taught at The Evergreen State College in Olympia in the 1970s and had numerous private students. He also put together and led several marimba bands that played throughout the Northwest and British Columbia.
"Dumi was very important in Seattle for his charismatic performances leading his Zimbabwean marimba ensembles and for his promotion of African music," a friend, Larry Israel, wrote in an e-mail.
"His life greatly impacted the lives of hundreds of his students, and his infectious and danceable music was heard and loved by thousands."
Israel and ethnomusicologists credited Mr. Maraire with bringing marimba music to Seattle and North America. Mr. Maraire arranged or composed scores of pieces for marimba ensembles.
In 1982 he returned to Africa to develop an ethnomusicology program at the University of Zimbabwe. He resumed teaching in Seattle from 1986 to 1990, when he earned a doctorate in ethnomusicology at the UW, then returned to teach at the University of Zimbabwe.
Mr. Maraire recorded a number of compact discs, as did his three local marimba bands. He was dedicated to preserving and expanding the traditional music of Zimbabwe.
Mr. Maraire is survived by his daughters Chioniso Maraire of Harare, Zimbabwe, and Tawona Maraire of New Haven, Conn.; and his sons Ziyanayi Maraire of Seattle, Dumi Jr. of Harare and Christopher Sparks of Seattle. He is also survived by the children he had with Chiorah-Dye: their daughter, Danai Maraire of Washington, D.C.; and their sons, Tendai and Dumi Jr., both of Seattle.
Mr. Maraire's wife, Linda Nemarundwe, and another son, Rusununguko Maraire, died before Mr. Maraire. - By Carole Beers, Sara Jean Green
Posted by wonder at 02:24

Pak job Ads and advertisements for
Karachi,Lahore,Quetta,Peshawar,Multan,Hyderabad,Rawalpindi,Islamabad and
http://allpkjobz.blogspot.com all cities of Pakistan
v