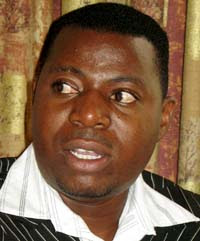 I will remember Tongai Moyo for his tearful pleas asking what sin he had committed against marauding entertainment journalists who hounded him after he flew to the UK when his father died in 2003.
The issue of his father’s funeral haunted Tongai and some people even suggested that he should consult traditional healers to cast out the curse that saw him escaping freak accidents.

Apart from Leonard Zhakata, Tongai Moyo was the second musician who was reluctant to meet me for an interview. After trying about four times in 2005, I gave up until the issue of vana murondatsimba cropped up.
Initially, Tongai could not say why he was reluctant to meet me. He would agree and then change a day before the meeting. Even when I finally met him during a gala in Kwekwe, it was a chance meeting but it warmed him up and then two weeks after the gala he called setting up a meeting.
He came to Harare and was based at Bira Hotel (formerly Terreskane) in the Avenues. In a wide ranging interview, Tongai said he had been ripped off by entertainment journalists and that made him unease about meeting me.
He pointed out that the story of his father’s death when he was leaving for the UK only died in the papers after he had paid journalists a lot of money.
“Mhosva yandakapara handiizive,” I recall him saying tearfully. “Mhuri yangu agreed kuti ndiende because ma-preparations ainge aitwa ose.”
He gave me the names of the reporters from across the media spectrum who took advantage of his father’s death. Even on the day I met him, an entertainment editor from a Sunday paper had just met him asking for money to buy petrol.
My second meeting was in Guruve when he had a Heroes Day show. He was very popular in Guruve and the venue was packed. And the third time was at the showgrounds during the Chibuku Road to Fame finals. It was at the height of their feud with Alick Macheso and Garikai Mazara and I organised that they surprise their fans by sharing the stage. (See Alick Macheso story)
Tongai came across as a level-headed musician. He listened and never pushed himself onto the people.
But it also appeared as if he had shadows that followed him especially after his father’s death. First was a freak accident in 2001 that almost cost the lives of his band members while travelling from a show at Nzvimbo Growth Point in Chiweshe. There, he lost all his equipment.
In 2003, thieves broke into his Kwekwe house and got away with electrical gadgets while he was performing, alongside Kofi Olomide at the Harare International Conference Centre.
In 2006, he almost died in a fire when his kombi caught a fire while driving to Harare for the Chibuku Road to Fame. Equipment and Z$570 000 cash were burnt. The fire started just after Tongai had disembarked from the kombi that had developed a mechanical fault.
“After the mini bus had broken down and could not start,” he said then, “I told one of my drivers who was driving the lorry we use to carry most of our equipment that I needed to drive the lorry.
“It was after I had left the seat and the other driver was trying to restart the engine of the mini bus that the bus was enveloped with a ball of fire.”
In 2008, Tongai was diagnosed with Non Hodgkin Lymphoma cancer. I met him briefly and he said he would be alright. But rumours of his death broke quite often after the diagnosis.
In 2009, his BT50 double cab from Gramma Records killed his nephew, Jacob Chosa, when it crashed and in 2010, his wife Barbara committed suicide.
Tongai dismissed the talk of a curse saying, “That is why they are called accidents. At times you can’t avoid them because God might have planned your life that way. But I am very much aware that people who believe in African tradition and Christianity have their different views.”
Like Oliver Mtukudzi, Tongai had no rich musical background. He emerged in 1988 when he joined Shirichena Jazz band with which he release Ndoita Zvangu Ndoga in 1991 and then a single titled Wandibhowa in 1992. He then moved onto another Kwekwe based band, Shirinhema.
Fed up with band hopping, Tongai formed the Utakataka Express shortly afterwards. In 1996, he released Vimbo which set him up as an upcoming sungura artist. The album sold more than 100 000 copies.
He was a self-confessed admirer of the late Leonard Dembo whom he claimed to have played with during his band hopping days. He even adopted one of Dembo’s sons but the boy walked away.

He will go down in Zimbabwe’s music history as a ‘now musician’ who penned songs which dealt with topical issues. His fans will remember his album Chingwa and a recent one he penned about ‘prophet’ Makandiwa.
Posted by wonder at 15:01

Thanks for the piece. A troubled soul indeed. We hope that he has at last found rest.