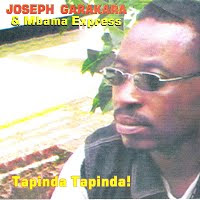 I trekked down Joseph Garakara, one time 2006 Zima winner, whose song Idya Banana shocked many when it won him an award, to a school in Epworth. I was not sure he was the guy I wanted. I had only his name. I had briefly met him during the awards ceremony at Meikles hotel in Harare but had not had enough time to talk.
Garakara speaks softly as if he is being pushed. Since he was about to leave the school for the city, I offered him a lift and he told me his story on the way.

Below is the story I did:

In football they say Gwekwerere Bhora, but in music we can now say Garakara Song!
Or if you want to go ahead and add Garakara Idya Banana Kechi-One because this is likely to be the title of Joseph Garakara's third album and that release will prove whether the 2006 Zima award winner is genuine or passing fad.
Or even just another teacher trying to crawl his way out of the classroom into showbiz like Bob Nyabinde.
Or if he is going to be like the Thula Bechulude teachers who disappeared when the echoes of their song died down.
"I am not new to the music industry. In fact, this album -'Tapinda Tapinda - is my second. My first was Uyu Neni, which we recorded with Record and Tape Promotions in 2004. Of course, it did not do well," he says.
But even the album that did not do well was not his first time into music because he used to play with Detembira and Chirikure Chirikure.
"I come from a musical family. I grew up playing mbira with my siblings - Daisy, Sekai, Norman and Lovemore - as Mhuri Yekwa Garakara. We played in all night ritual ceremonies for a fee," he explains.
Both Garakara, who was in Grade 5 then, and his siblings were not trained to play mbira. They used to watch their elder brother Lovemore playing the instrument. When he was out, they would sneak into his hut where they taught themselves how to play on his mbira.
When he found them out, Lovemore was not angry but worked with them instead.
The next stage was when Garakara's father, who was also a musician who played kwela when he was in South Africa, started making guitars for sale. Once again, the youngsters would wait until he left home and then pounce on the instruments. '
When the father discovered their ploy, he did not angry either but encouraged them by showing them how to play.
Thus Garakara's fate was sealed.
"After school, I did some part-time teaching until I got a place at a college in •Harare. I did not take music but after training, I became my school's choirmaster in Mhondoro. But I longed for music and when I saw an advert in the paper for studying at the College of Music, I applied and attended a two-year full-time course.
"I graduated last year with two distinctions in performance studies and organology. I believe that the success of my album is largely because of the knowledge I acquired from the college," he says.
The songs on Tapinda Tapinda were composed last year and the album was supposed to have been recorded in September last year but was put on hold following the death of his father.
Recording was then set for October but again there was a family bereavement as Garakara's sister passed away and the album was deferred once more.
"I was not sure of the album's success until I was given a contract," he confesses.
Idya Banana, Garakara says, does not mean what most people think.
He says he chose banana as a symbol of something soft and by using it, he was; in actual fact, pleading with a girl to soften her heart.
"I was just saying to a girl: 'Wadii kurerutsa ndima?'" he laughed.
He added: "Of course, the other song on the album that could do well if given a chance is Ndege Yamashanga. In the song I sing about people who make foolish decisions."
As the Zima’s most promising artiste, Garakara says there is pressure on him already to prove that he is not just passing but here to stay.
"I know people are expecting a lot from me but then I am a poet. I am also a trained musician. I use notation and understand quite a lot of things. With this knowledge, I do not think that there are problems.
"We are already rehearsing for our third album which is going to be called Kechi-One," Garakara says. .
He admits that his music carries traces of Njerama's beat but is quick) to say that in music one cannot pinpoint exactly where one's inspiration i comes from. !
"It could be true but I regard Richard Mafuwamhandu as the man who inspired me. I used to listen to his music quite a lot. I like his lyrics especially," he reveals.
The late Mafuwamhandu was the lead vocalist of the now defunct Nyaminyami Sounds.
The 37-year-old teacher, who has since transferred to an Epworth school where he has been now for a month, says initially his workmates did not know that he was a musician.
"Nevertheless, they support my efforts," he says.
Posted by wonder at 11:13