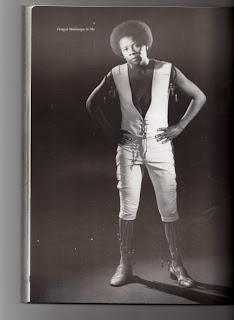 In 1982, a Zimbabwean who had stayed in the United Kingdom for 12 years returned home armed with an MSc degree in mathematics and accompanied by a number of other young men from the West Indies.
The group of about seven was not accompanying Fungai Malianga, the Zimbabwean student, to his graduation party, but were coming to tour the newly independent country as reputable funk musicians, hence their name Zimfunk Band.
Malianga, who has since returned to the UK is no small time musician but an experienced one whose music, despite not being popular with many, carries real feelings.
His 1991 album titled 10 Years On - Children Survive, which dealt with issues affecting street kids and baby dumping, is just one example of how sensitive Malianga is.
The album, whose proceeds went to the Zimbabwe Child Survival and Development Foundation, carried songs such as Frontline Child, Street Kids, Baby Dumping, Voodoo and Fly.
In an interview with one Zimbabwean weekly soon after the launch of the album, Malianga said:
"I am not the kind of musician you would hear singing 'I love you babe', I write lyrics that are meaningiul which touch on issues affecting our society, especially the innocent children."
He was at the forefront of the Jethro Shasha Drum Scholarship Fund, which later became the Heroes of African Music Fund that sponsored those who were keen to train at the Zimbabwe College of Music.
The first batch of the scholarship's 33 recipients graduated with three-year music diplomas in 2001.
Malianga was at one time involved with the Ntional Hunger Jazz Concert as both an organizer and participant.
In 2002, he spearheaded the National Blood Transfusion Service campaign that was meant to encourage people to donate blood through a festival dubbed the Jazz Aid-Mazvita to the Youth that featured Olvier Mtukudzi and Louis Mhlanga.
His 1981 album titled Zimbabwe Funk had songs about Zimbabwean culture.
Then there was Jesus, You Saved My Life in 1994 in which he praises the Son of God for helping him out of a sinful life.
On the same album are tracks such as Musauraye Vana Venyu, Apo Jeso as well as Crucified.
The gospel album was a surprise to many because Malianga sported an Afro-hair style in the beginning and later had his hair permed – both associated with a secular lifestyle.
Explaining the change on the album’s sleeve, Malianga said: “This music I have always wanted to make. Working through this album has been a totally inspirational affair. I sincerely hope that you do not just enjoy the music, that it goes beyond enjoyment and inspires you to relax and think again about life.”
While fans were surprised by Malianga’s sudden change, if one takes a close look at his music career one sees different phases.
He stayed and studied in London for four years and took up a teaching post in North London before giving it up for music.
When he met another Zimbabwean – Dr Fred Zindi – who was also studying in England, they played the club circuit and became popular at joints such as Ronnie Scotts, the 100 Club and Music Machine in London.
Later, Malianga became a member of the eight-piece Funkies Band that lasted three months.He was, together with the late Jethro Shasha, a member of the 2D Sounds. There was also the group the Prophets and then the Ottis Waygood Blues Band.
With Zindi and Davies Mhambi, Malianga formed the Stars of Liberty before teaming up with some Nigerians and West Indies musicians under the trade name Abbrakkas.
He then went solo and released two singles – Jungle Voodoo and Dr Rasta Man.
In 1980, he joined the Zimfunk Band with which he toured Zimbabwe before he chose to stay home.
When he remained behind, Malianga had stints with various jazz groups and managed to record KuMakwiro, among others.
Malianga’s sensitive touch should not surprise people because he was born in a Christian family and his father died a few months before his birth in 1948.
At a tender age, Malianga became involved in Christmas parties where he played the penny whistle.
Maliange is now living in the UK where he is said to be teaching while playing the club circuit.
Posted by wonder at 10:05

Hie Sir,Thank u so much for a job well done.However here is some more info on one Mr Joseph Kishala a.k.a Joseph Abraham.
Born-1937-died 5 April 1993
Status-was married to Elizabeth Alfazema
Siblings-3 sons and 3 daughters,(Crispen-late,Jacqueline-late,Lovemore-38 years,Agnes-32years,Bianca-late,and myelf Taitos-24years.
He had another daughter Chipo Tsunga with His
first wife,the former Zimbabwe national netball team.Pliz note currently we are not by any way involved in Music Industry hence any claims aligned to that are hereby pronounced null and void till you here from us.We are by no means collecting any royalties aligned to him if thre are any for we understand the rights of the band and estate are being accorded to Mr Andrew Ngoyi.thank you for recognising the efforts of our father in Zim Music Industry.For more pliz get in touch with us on futbolrumours@yahoo.com,lovemoreabrahamu@gmail.com or Taitos Abraham,Lovemore Abrahamu on facebook