Sungura the Band and the music - origins 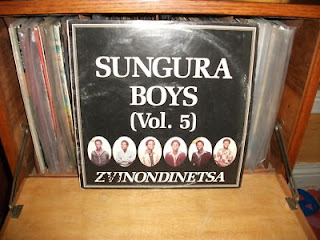 The real master of sungura music is John Chibadura who brought it to the bright lights of Harare from the backwaters of Domboshava riding on the ashes of Mverechena Band in the early days of independence.
Chibadura was there when the first ever sungura song, Huri Hwese naKatsande was released by the Dzivaresekwa-based Holy Brothers Band. He was there together with Shepherd Chinyani, Sam Chikadzura and Fox Maluwa.
It was Chibadura together with Chinyani who introduced the brand to Ronnie Gatakata, Ephraim Joe, George Matizha, Moses Marasha, Never Moyo and Bata Sintirawo who were based at an Mtoko hotel.
It was Chibadura who stole the shine from the Chimbetu Brothers when the Sungura Boys were expelled from Mushandirapamwe Hotel where they were backing the brothers.

There has been a lot of debate on the origins of sungura and how it ended up being served as one of Zimbabwe’s hottest music menus.
Before sungura, there was just Afro-pop and that meant Thomas Mapfumo and Oliver Mtukudzi’s style and that of any other Zimbabwean musician. There was also Afro-jazz.
This was the situation until the birth of the Sungura Boys – a grouping of rustic farm dudes who started playing on the farms especially Mashonaland Central - Shamva, Bindura, Mvurwi as well as some parts of Mashonaland West  - Chinhoyi, the scattered mines – and Beatrice.
The name sungura is taken from Swahili folk-tale which means rabbit. Earliest east African rhumba records had a picture of a rabbit as part of the label.
These records were very popular on Zimbabwean farms long before the end of the war when comrades who returned home and had received their training in Tanzania introduced it to rural areas.
Even then, sungura had to gain momentum outside Harare before it was accepted a few years after the war.
One such place was the then Gillingham, now Dzivaresekwa, where most boys from the farms first stayed and met Shepherd Chinyani.
Here I refer to virtually every popular Zimbabwean sungura artist – the Chimbetus – Simon and Naison -  Nicholas Zakaria, John Chibadura, Alick Macheso, the Ngwenya Brothers, Ephraim Joe and Tineyi Chikupo among many others.
Just at what point the brand of Zimbabwean rhumba was christened sungura is not clear. But what is known is that the band that became the Sungura Boys was initially called the Holy Brothers Band while based in Dzivaresekwa in the late 70s. Then there was Chinyani, Chibadura, Sam Chikadzura and Fox Maluwa.
This was the group that released the first sungura song called Huri Hwese naKatsande.
Later, the group disbanded and the members moved on. Chinyani and Chibadura joined Tineyi Chikupo in his group, the Mother Band.
When Chikupo left, Chibadura and Chinyani travelled to Mtoko where they joined Ronnie Gatakata, Ephraim Joe, George Matizha, Moses Marasha, Never Moyo and Bata Sintirawo who were based at a hotel at Mtoko Centre.
When the war heated up, the group relocated to Domboshava and set base at Mverechena Hotel and assumed the name Mverechena Jazz Band.
The group again changed its name from Mverechena Jazz Band to Sungura Boys when they relocated to Mushandirapamwe Hotel to back the Chimbetus after the unceremonious departure of the OK Success.
Chris Matema of Gramma Records advised the Chimbetus to approach the band in Domboshava for help. A deal was struck and both sungura the music and Sungura the Boys came to Harare.
But after a while, the Sungura Boys, just like the OK Success felt that backing the Chimbetus who had assumed the name the Marxist Brothers even when they recorded with the backing of the Boys was not working.
The Sungura Boys backed the Chimbetus on their earliest singles Patakatsika, Sarura Wako, Denda, Tezvara Waramba and Ndiri Musonja.
But the Sungura Boys wanted a share of the pie and they recruited John Chibadura as a vocalist. Thus for the second time, Chibadura who had cut his teeth in Dzivaresekwa with Chinyani came to Harare.
When the stand off heightened, the Sungura Boys were asked to leave Mushandirapamwe Hotel. Fortunately, this gave Chibadura an opportunity to rise and he did.
But again his fame did not go down well with others resulting in Chibadura leaving the group in 1985 to start his own band The Tembo Brothers. With Chibadura’s departure, the Sungura Boys died a slow death.
It was, however, replaced by the Khiama Boys, formed and led by Nicholas Zakaria who had emerged from the Mazowe farms via Gillingham where he rubbed shoulders with Chinyani.
Even Ephraim Joe moved over to Khiama Boys before he went solo. There were many others too: Cephas Karushanga, System Tazvida, Alick Macheso and Sailas Chakanyuka.
At its height, the Khiama Boys unleashed one mega hit in the name of Mabhauwa that ushered in System Tazvida as a great and unique vocalist.
But the success of Mabhauwa also meant a split that saw Karushanga forming Mabhauwa Express and System Tazvida founding the Chazezesa Challengers.
Much later, Macheso formed the Orchestra Mberikwazvo when he too found himself in the cold after Zakaria took leave and locked up all the instruments.
Posted by wonder at 10:27