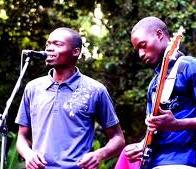 I never met Leonard Dembo (see the story on this blog about Dembo) but in 2006 when the now defunct CBZ A Academy honoured the late musician, I finally met his wife, Eunice Munati.

She is a tall imposing mother who takes no nonsense from any one. This, I have no doubt, is how she managed to keep her children from the prying eyes of the media after the death of her husband.

At the time, she still drove Dembo’s Cressida – it had seen its days though - and stayed in the family’s Belvedere home.

We met at the massive Celebration Centre in Borrowdale where Dembo and Oliver Mtukudzi were honoured for their outstanding contribution to the Zimbabwean music industry.

Earlier in the week when I got the news, I contacted Dembo’s wife, Eunice, for a family comment.

Although in recent media reports she said she last spoke to the Daily news in 1996, it appears Eunice has forgotten that she spoke to me when I broke the news to her that her late husband would be honoured.

It was on 7 December 2006 when I called her for a story that ran in The Herald the next day.

Prior to calling her, I had been warned that she was not media friendly and that she would not talk to me.
But still I went ahead and called her and she spoke to me.

Our discussion went on well while we spoke about the honour and she told me that she would attend together with her kids.

But when I wandered into her boys’ lives, she stiffened up and I could feel anger and reluctance. It became worse when I spoke about Innocent Mjintu and his efforts to revive, Leonard Dembo’s band, Barura Express.

Eunice had no kind words for Mjintu and I wrote the story quoting her exact words. The next day, she called me threatening to sue.

Just after her call, a man purporting to be her lawyer called me talking about the same issue.

Later, a story about how one of her sons, Morgan, had trouble with police in Botswana after a car break-in fuelled her anger and she went full steam.  The boy was later deported.

At the time, nothing much was known about Tendai and Morgan who were 10 and 9 years respectively when their father died in 1996 because Eunice made sure that she kept them away from the public glare and from pursuing their father’s music career.

Now, the boys are coming out too late and there is no sign that they can do much.

Morgan too admits this in an interview with Silence Charumbira of The Standard.

Mjintu also has doubts that the Dembo siblings will pull off another Chimbetu stunts.

Mjintu believes the boys have no sound advice and parental guidance while growing up. He also says they never had the opportunity to see their father in action.

Morgan and Tendai are on a mission to revive their father’s legacy and recently released their debut album titled Kutsika Matsimba.

Morgan hogged the limelight for mischief on a number of occasions and many critics saw him as a stumbling block to the revival of Barura Express, but the young artist last week revealed he had reformed so that the band could prosper.

“Ours is a more painful journey because unlike Sulumani Chimbetu or Peter Moyo, we never watched our father performing and for us to entertain any hopes of getting anywhere close to what he achieved, we have to up our game,” said Morgan.

“That is why I decided to do away with the mischief. There is a lot more serious work that needs to be done and I cannot do that when I am drunk.”

His younger brother Tendai said he was happy that his brother had realised where he was getting it wrong.

“We are now fully committed to the cause since Morgan reformed,” said Tendai.

“We have been touring various places to market our debut album Kutsika Matsimba which is doing fairly well despite the poor marketing by our stable and the problem of piracy.

“Another driving force is that we have a committed manager, Willard Shava Chirenje, who has been working flat out to make sure that we are on the right track.”

Chirenje has vast experience in music promotion after working with one of the most prolific local music promoters, Patson Chimbodza aka Chipaz.

His engagement has seen the young artists managing to record their long-awaited first album, which they had failed to do on their own.

“We sat down and had a serious talk with the boys after which, we came up with a plan that we are using now,” Chirenje told StandardLife&Style recently.

“The fact that Morgan no longer drinks, I think is enough proof of how serious we are.”

Since making a decision to start careers as professional musicians a few years ago, the brothers have seen both the highs and lows of the sector.

Lovemore Meya
Arts Correspondent
Zimbabwean music is seeing many sons and daughters of musical legends taking up music, though they are not as talented as their parents. Having sampled good music from some of the country’s fallen musical giants that include Marshall Munhumumwe, Big Tembo, Tongai Moyo, James Chibadura, and System Tazvida, just to single out a few, music fans expect to get equally good music from their offspring.

That has not been the case, because the children of these musical legends have failed to measure up to their late parents’ musical prowess.

A number of bands left by fallen musicians have failed to keep the torch burning, living their legion of fans starved of uplifting music.

The few that scratched the surface are struggling to release their own albums, while some are merely riding on public sympathy.

One striking example is that of the Dembo brothers, Morgan and Tendai, who have failed to rise to the occasion despite the lofty heights achieved by their late father, Leonard “Musorowenyoka” Dembo achieved.

The late frontman of Barura Express must be turning in his grave as his sons have failed to carry his legacy.

Innocent Mjintu, one of the surviving members of Barura Express, said the pair was ill-advised, something that has contributed to their demise.

Mjintu, who worked with Dembo for over a decade, said the duo could have done better had they received proper guidance.

“During that time his two boys, now heirs to the throne of Barura Express were still very young. We had a good working relationship.

“While growing up, they were not willing to learn what they needed to do to carry their father’s brand and ultimately grow their own.

“I told them that we could still grow the brand but we needed to work together.

“However, after meeting some other musicians, they got the wrong advice on how to do things.

“They approached me and said they needed to do their own thing and that is how we parted ways,” said Mjintu.

He adds: “Even though they have recorded their first album, I think it is still early to judge whether they will manage to maintain the Barura beat.”

Mjintu, however, said he was willing to teach the pair some tenets of good music.

“Whenever I meet their mother, she often asks me whether the two are coming to me for advice.
Instead of telling her the truth, they tell her a different story,” he said.

No comment could be obtained from the Dembo brothers. – The Herald
Posted by wonder at 23:19