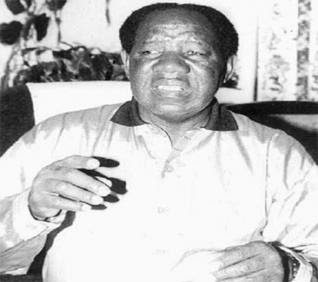 I was staying in Mvurwi when the late Safirio Mukadota Madzikatire used to come for performances. It was at the height of the war and his son Elijah Madzikatire was at his peak singing Vana Tinogumbura and Karate.
I was a small boy at the time. But I recall vividly every time Mukadota toured. His shows were called family shows. They were combos. There was music, sketches and drama. Sinoia "Manyowa" White would provide the Michael Jackson act while Elijah had a more serious musical act. During those days he would don colourful flowing robes. Then Mukadota himself and the late Elizabeth Katarina Taderera would come on with sketches.
Years later after the war, I would run into Mukadota – old and spent – sitting in the Africa Unity Square. At the time, there was talk that he had lost everything to gambling.
And some more years later, I would talk to his son Elijah who told me that his father made it difficult for him to continue with music. He said there were squabbles especially when Mukadota had realised that his days were numbered and that the son was going ahead.
And a few years back, I got what could be a complete picture of Mukadota when I spoke to Laina and Kenneth Mataka who had groomed the man that became one of Zimbabwe’s greatest ever comedians.
Both Laina and Kenneth spoke fondly of Mukadota whom they met in Mbare in the 40s and made sure that he had learnt as much to set him up in life.
Indeed, Mukadota had a very colourful life and career. He is one musician who teamed up with various other artists and then moved on.
Below is his life as told by the people he met or worked with.

If the late comedian, Safirio "Mukadota" Madzikatire were a road, many feet would have trudged that road to stardom.
And if indeed he were a road, it would have started sometime in the 1940s in the then Harare Township (Mbare) in general and Majubheki Lines in particular, where music resembled flowers growing in a neglected garden.
Way back then, Safirio was a pupil at Chitsere Primary School in Mbare but one whose life was steeped into the arts. Seeking guidance, he joined the only couple that was always there for many unnurtured talents - Kenneth and Lainah Mataka - in 1948.
"Safirio came to us when he was a child in 1948. He could neither playa guitar nor sing," Kenneth still recalls.
After the grooming in tap-dancing, guitar playing and stage work, Safirio left and became a nomadic comedian and solo guitarist following in the footsteps of many others at the time.
By 1953 when two BuIawayo-based Township jazz groups, Golden Rhythm Crooners and the Cool Four were touring the country, Safirio would mix with them as he blazed the way to stardom.
A Golden Rhythm Crooners member then, Timothy Sekane, who is now with the Cool Crooners, also remembers instances when they would meet Safirio during their tour of the then Salisbury (Harare).
Despite the fact that at the time there were popular groups such as the De Black Evening Follies and others, Safirio had his own place in the sun.
"The late Safirio Madzikatire was there, singing as a maskandi (solo guitarist). His favourite song was Ndatemwa Negogo," recalls Timothy.
Sometime then, Safirio met with the late Jordan Chataika, with whom he held joint shows as maskanda musicians.
In fact, Chataika recorded his debut seven single titled Vana Veisrael in 1961 with Safirio’s help.
“If you listen to that song,” Chataika’s sister, Molly Mungate, who later backed her brother said, “you will hear Safirio’s voice”.
Chataika, who today is regarded Zimbabwe's pioneer gospel artiste, had just moved into town from his home area Mhondoro.
When Chataika left to join the Great Sounds for a stint, Safirio, who had no instruments of his own, linked up with a group known as the Afro Jazz Fiesta. At the time, his son Elijah had matured enough to man the gates when he could not play any musical instrument.
In 1964, Safirio met Susan Chenjerai in the streets in Mbare.
Susan was singing the song Hondo YeChindunduma and Safirio being a great scout of talent readily identified the vast talents inherent in Susan, who had also passed through the capable hands of Kenneth and Lainah Mataka
That meeting heralded the beginning of a creative relationship that would last 20 years and leave an indelible mark on Zimbabwean arts industry.
Their first outfit together was called the Tanganda Tycoons and it focused on both sketches and music.
Besides Susan and Safirio, some of the members included guitarist Leo Chirenda, drummer Richard Saidi, dancing girls - Abigail Dhliwayo, Margret Sibindi, Gladys Motsi and a South African, Emery.
This was the group that backed Susan and Safirio in their duet of her composition, Isaac Hauchandida Here in 1967.
By 1971, the Tanganda Tycoons disbanded and Safirio went on the road again while Susan, who had found a job with a supermarket chain, took a break.
This time, Safirio went to the Skyline Motel, just on the outskirts of Harare along Masvingo Road, where he met Phillip Svosve for the first time with whom he would meet twice again in less than 10 years.
Svosve belonged to the group Delight that was resident at the motel and it was this group that Safirio later took charge of after negotiating with Bernard Mpofu, who owned the instruments.
"I first met Mudhara Safmo at the Skyline Motel. I am not sure whether he had just split from the Thnganda Tycoons or the Afro-Jazz Fiesta but he brought Chirenda, Saidi and his dancing girls," Svosve revealed.
"He was into drama as well as music and had recorded a number of singles. But after three weeks with him, we felt we had had enough. We dumped him after Mpofu had won another contract at the Feathers Hotel in Mabe1reign.
"Safirio retained his members minus instruments.
He had to hire some from a Mbare businessman, Kenneth 'Mr Bond' Chogugudza."
This was when Safirio founded the sea Cottage Sisters that moved with the Ocean City Band and at the same time started a radio programme known as Mhuri YavaMakore that featured, besides himself, Susan, Elijah and Susan’s late daughter Patricia.
Webster Shamu produced the programme that was later taken over by the late Patrick BAnjira when the former had left for the liberation war.
When the programme became a hit, it was adapted for television and a disagreement between the producers resulted in a change of name from Mhuri YaVaMukadota in 1972.
Mukadota, according to interviews given by Susan over the years, was a comical character from her village. And Safirio became Mukadota while Susan was Amai Rwizi with Elijah being Rwizi.

Other characters cropped up. These were the late Absaiom. Mangota (Baba VaPhineas), Cathrine Madzore (Machipisa), Juliet Masunda '(Amai Phineas), Boniface Chinemo (Bonnie) and much later John Muyambo (Chibhodhoro), who came from the Great Sounds among others.
With his sea Cottage Sisters and Ocean City Band, Safirio, who was known then as Mukadota, became a scout for great talent wherever he went to play.
In mid-1970s, he lured Muyambo and the contortionist Simanga "Mashura" Ndlovu to enrich his multifaceted group.
One of Safirio’s richest finds was the late Elizabeth "Katarina" Taderera, whom he found in Mutare during one of his tours in 1977. Katarina became a reliable partner on both stage and television during the Mhuri YaVaMukadota drama series.
Then there was Sinoia "Manyowa" White too, who was discovered after Safirio had asked a group of boys in Mvurwi to dance.
“I was a specialist in robot dance, that Michael Jackson kind of dance. In 1979 when Mudhara Mukadota toured Mvurwi he asked us to dance. After the dance, he gave me his address and invited me to Harare,” Manyowa, who later joined Safirio and spent seven years with him, said.
In the early 1980s, both the Ocean City and sea Cottage Sisters started to flounder after in-fighting over money. Svosve, who had rejoined the group, and other members of group left Safirio and Elijah, whose musical career had taken off well, in a lurch when they left with the name Ocean City Band.
Katarina teamed up with Comrade Chinx's Mazana Movement while Safirio put together a new outfit, the Brave Sun. But it was not the same any more since this outfit too faltered, leading to the formation of the New World Band, which however, failed to bring back the good old days for Safirio.
Other artistes who were discovered by Safirio were the late Tobias Areketa, the late George Pada and Fidelis Cheza who was known then as Chikwama and Danger of Studio 263. Fidelis remembers his time with Safirio:
“He had seen me at work at the Le Coc d’or (a defunct night club in Harare) and sent for me in 1983. Because I had always wanted to act, I agreed.”
Indeed these people are not the only ones that remember Safirio, but the nation does too.
Posted by wonder at 02:06

I remember going to some of the late Mukadota's shows in the late 80's with my dad, who also played the bass guitar in most of Mukadota's songs released in the 80's. Good times

You ommited a few key names in your article. Josh tobias brother, wiseman guitar and vocals, anisto or alisto iam not sure, priscilla she used to sing with tobias,mollet i think she was a bulawayo girl i made friends with these guys around the 80s

Wiseman was very talented,he could at times play keyboards

The line up by then was Tobias Areketa rhythm, Joshua Areketa bass,Wiseman Gwata keyboards, Chidziva drums and a guy with a Malawian name who played lead.Apparently they were lured by Elijah after his father was deserted by the ocean City band