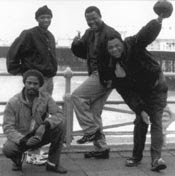 The closest I got to the late Marshall Munhumumwe was meeting his son, Marshall Munhumumwe Jnr. The young dude came to complain about an article I had written where I said that he had destroyed his father’s band. In the article, I discussed Fred, James Chimombe’s son and the Tazvidas.
At the time – 2006 – Marshall Jnr – was running some butchery in Seke and Fred too had opened some grocery store in Goromonzi.
When I explained to him that he had fought James Nyamande, the man who could have kept his father’s legacy alive, Marshall Jnr threatened to sue me. I dared him. Until today, he hasn’t.
I also met and spent time with James Nyamande, the man who could have revived and perpertuated the Four Brothers’ legacy. He is a humble man who believed that he had what it takes to push on the Four Brothers ahead into the future. But somehow riding on borrowed fame does not take you far. James never made it into the future.
The last time I saw him was during a show in the Harare Gardens. It was supposed to be a great show but the stage and attire marred the show.
I recall writing about the poor performance and the man came to see me, tears standing in his eyes. I have no doubt that with his silence today James has tears in his eyes. He real wanted the Four Brothers dream to live.

While the now defunct Four Brothers were born of the remains of another great band - The Great Sounds - in 1977 there are no signs of another band growing big from its remains.
In fact, the Makombe Brothers led by James Nyamande should have been the tree that got its life from the manure provided by the death of the Four Brothers but that did not work and the once mighty foursome’s legacy is to remain a legacy with no heir to perpetuate it.
Seeking a permanent group, the three - Marshall Ticharwa Munhumumwe, Alex Phiri Chipaika and Never Mutare - co-founders of what later came to be known as the Four Brothers met by chance just when the Great Sounds was dying.
First to appear on the scene was Chipaika who came to join the Great Sounds after the departure of John "Chibhodhoro" Muyambo, who went to join the late Safirio "Mukadota" Madzikatire's group around 1978.
Phiri had met the Great Sounds in Highfield at Mutanga Night Club while Munhumumwe and Mutare hitched on the dying group in Chitungwiza where they played at the Chikwanha Hotel.
These were the people who renegotiated for the renewal of the Great Sounds contract with Chikwanha Hotel management after Banda's departure.
Although they were awarded the contract, the trio could not continue using the name Great Sounds that had been formed some 10 years earlier by Elias Banda, Daram Karanga, Grant Ndowa, Moses Kabubi, Pius Makokoba and Elias Chimwara.
Banda and Karanga had just left the Thomas Mapfumo-led Springfields in which they had belonged together with the nomadic stars - Madzikatire and Susan Chenjerai.
Munhumumwe had had stints with groups such as the Black Jack before teaming up with Thomas Mapfumo, the late Jonah Sithole and Leonard Chiyangwa in Mutare to form the Blacks Unlimited that disbanded after Jonah's departure for Harare where he founded The Storm.
The other three members also headed for Harare where Mapfumo joined the Pied Pipers at Mushandirapamwe Hotel and Chiyangwa went to join the Acid Band, a group that• was playing at Mutanga across the road in Highfield.
Later, Mapfumo would join Chiyangwa at Mutanga and with time lead the Acid Band with which he released his earlier songs before reviving the Blacks Unlimited after Sithole's return to the fold.
Munhumumwe went out of town to join the Domboshava-based Mawonera Superstars that was owned by Mawonera Hotel and was led by the late Tineyi Chikupo in 1976.
While there, the group released the single, Kapfumo Kandibaya.
A year later, Munhumumwe was on the move again, this time back to Harare where he joined the Great Sounds before its demise.
Since they were three - Munhumumwe (drums), Alec (guitar) and Never (bass guitar) - they had to recruit a fourth member who was Frank Sibanda, the only surviving original founder of the Four Brothers today.
While the group got its name from being the foursome, they had by 1987 brought in another member, Edward Matiyasi, who played another guitar and in 1990, Albert Ruwizhi, drummer and vocalist, appeared on the scene.
Ruwizhi was a stand-in for the ailing Munhumumwe.
In fact, when the great vocalist's health failed him completely, Ruwizhi took over and even recorded an album Maminimini before he passed away ironically ahead of Munhumumwe in 1999. Robium Chauraya replaced Ruwizhi when he passed away but he also died two years later thereby opening the way for Nyamande, another drummer and vocalist from Kwekwe in 2001 after Tymon Mabaleka of Gramma who produced both the Four Brothers and Makombe Brothers had seen it wise to incorporate him.
Nyamande's musical curriculum vitae included stints with Dawn Groovers, Livewire and Pengaudzoke where he played drums in 1993.
Before being called to put on Munhumumwe's shoes, Nyamande had in 1997, together with Juweti Mujajati, Evans Vheremu, Philemon Sakala and Simba Ndowa founded his own group, the Makombe Brothers that was based in Kwekwe.
The group release two albums, Mudyandigere and Pfuma Yenhaka in 1997 and 1998 respectively.
However, Nyamande's stay with Four Brothers was not a rosy one because of numerous squabbles he encountered with Marshall Munhumumwe (Junior),
Among these was the claim that Nyamande was copying his father's music. But Nyamande, who says he had a natural liking for the Four Brothers from an early age, gives the main reason for their endless rows on poor remuneration.
Described by many people, as poetic and gifted, Munhumumwe would dig deep into literature from where he came up with lyrics for most of his songs. His source for brilliant songs such as Vimbai, Rugare, Siya Zviriko, Zuro Chisara and Pfimbi Yema Shoko were poems written by the late Aaron Chivaura.
One of their best albums during the group's heydays was Tonosangana Ikoko that carries songs composed by Patrick Mukwamba in 1990. Some of the hits on the album are Bonasi and Usanyare Basa Raunoita.
Besides this, the group was among the first to tour Europe and participate during the WOMAD Festival in England in 1988.
The group also toured Japan with Clive Malunga in 2002 after Munhumumwe's death.
That Munhumumwe and the Four Brothers were one of Zimbabwe's most prominent groups is doubtless and that its death will not give life to another equally popular group is also doubtless.
Posted by wonder at 01:33