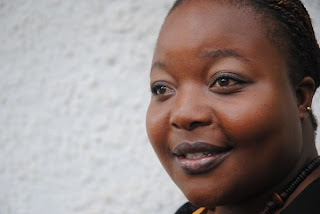 I met Rute Mbangwa when I was writing for the Southern Times way back in 2004. She had just released an album and being a jazz beat, I considered her very brave. Jazz, I had learnt over the years, is not for the faint-hearted or those who are out to make a quick buck.

When an instructor with the Children’s Playing Arts Workshop picked on the short stout girl to lead in the opera, Christmas in Africa way back in 1994, little did he know that he was setting her on a career that would see the girl emerging as Zimbabwe’s own Mama Africa.
Nine years later, Rute Mbangwa who never had any interests in jazz and never been involved in any musical ventures during her childhood, is today Zimbabwe’s most promising young jazz artist.
“I have a powerful voice,” Rute said. “And besides being soulful, it soothes.”
Explaining how she became interested in jazz music, Rute who is just 19 innocently said: “It just came. I real do not know. I had never had anything to do with it. I did not know the like of Louis Armstrong before.”
Admittedly Rute’s venturing onto the music scene was an accident but a harmless one.
After the experience with Christmas in Africa, Rute was fortunate to meet her cousin, Rockford ‘Rocqui’ Josphat, one of Zimbabwe’s leading urban groove artists during one holiday.
At the time, Rocqui was a member of his school choir and was very much into music.
“I remember that we wrote love songs together and then practiced singing them as Acapella,” recalled Rute. In 2000, their friends who were pupils at a Harare girls’ school invited the duo to perform during the Miss Valentine at Queen Elizabeth School in Harare where they sang their compositions much to the pleasure of those who had attended the function.
In 2001, they went to participate at the Spotlight Talent Identification Show in Harare as a duo but when they met three other aspiring musicians, Ngoni Kambarami, and the duo of one Jimmy and Newell who made up the group Anther Tribe.
“Once at the show, we teamed up with these guys and sang as Anther Tribe. We did copyrights of a song called Danna and Mafaro that I had co-wrote with Jimmy,” Rute said.
They were voted the best Afro-jazz group and the best overall group. For their efforts, they received Z$25 000.
One of the judges during the talent shows the renowned township jazz musician, Tanga Wekwa Sando, fell in love with Rute’s powerful and soulful voice.
“Tanga asked me to join him as a vocalist and dancer.
Together we did the album Shungu from which came the hit song Paida Mwoyo,” explained Rute.
Because she lives on music, Rute had to hold solo shows with the backing of jazz-fusion groups such as Summer Breeze with which she appeared during the 2003 Summer Jazz festival held at the Zimbabwe’s jazz joint, Jazz 105.
“I had an opportunity of trying my music on the people during these shows and it worked.”
She also worked with groups such as the youthful Afrika Revenge when they recorded their blistering second album, Qaya Musik whose plug song is Wanga.
“Besides recording, we did a lot of shows with the guys.”
There was also Fungai Malianga who is now playing in pubs in the United Kingdom. “I backed him n live shows.”
“I also had a stint with Betty Makaya. In fact, I wrote one song for her and we co-wrote another,” she revealed.
She was drifting from Tanga at this stage.
And she started looking for a band that would back her. Too Open was a group that she had met during shows and somehow, they just clicked.
“They play the type of music I like. And it was natural that I had to work with them,” Rute who launched her debut album, If Only My Heart Had a Voice, in Harare said.
The album is a brilliant product, which with favourable airplay could propel the teenage artist to unprecedented stardom.
“It’s not all that easy,” she confessed. “Sometimes I wish I had not ventured into this (music). The radio stations are not supportive of us who play jazz. And with such attitude, our music is dying.”
Besides unsupportive radio stations, Rute bemoaned the footloose nature of band members who leave to join other bands thereby disrupting progress.
“There is so much exploitation in the local music sector. If you wish to perform as a curtain raiser for an established group, you will be told that provided it’s for free, you can come,” she said adding that sometimes she finds it better to just keep her cool.
She also said that if she chose to perform for free, she would still pay her backing group as well as many other sundries.
“If you show that you are desperate, then you are easy prey,” she said innocently.
What makes things more difficult for Rute is that she is doing her own marketing and promotion and that needs a lot of money.
Whatever the case, the fact that she dared venture alone into a zone that other older women had feared to go it alone, must be enough encouragement for Rute.
In fact at 19, she has a whole world ahead of her and enough time to correct whatever has gone wrong today.

Below is a one-on-one she did in March 2011 with Ruth Butaumocho, Herald entertainment editor