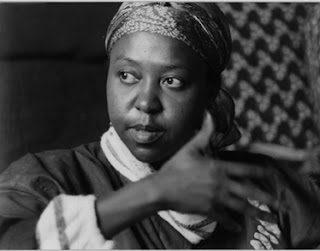 In this trilogy, I will trace the lives of Chiwoniso's mother, father and Chi herself. Although I never met Linda Nemarundwe, the mother, I met and shook the father - Dumisani's hand in 1998 when Chiwoniso launched her album Ancient Voices at the Alliance Francaise in Harare. It was a year after her mother's death. I saw father and daughter putting up a tearful performance in honour of the mother whose story I tell below.

In 1998 the late Dumisani Maraire and his daughter Chiwoniso performed together at the Alliance Francaise along Herbert Chitepo Avenue in Harare. The occasion was the launch of Chi’s debut album, Anciet Voices. Then Chi was still hooked to Andy Brown who was also there. The late Mendy Chibindi who later joined Oliver Mtukudzi was there. I remember Japhet Ncube who is now in SA was there. So was poet Chirikure Chirikure.
Apart from celebrating the launch, the occasion was also used to congratulate Chi for winning the coveted Decouverte Afrique award given by Radio France International for the album that carries one of her most emotional songs – simply titled Amai.
I recall Dumi speaking glowingly about his late wife – Amai Chi and wishing that she was there to see the daughter they had mentored to be like them. It was a tearful affair.
A year later, Dumi passed on leaving a legacy of great mbira playing and music making in his children. Most know Chi but there are other Maraires who follow their father’s footsteps. There is Tendai who is also known as Baba Maraire from Dumi's marriage to Lora Chiorah Dye.
But this is Mai Chi’s story as I captured it eight years later after attending the launch of Chi’s album that celebrated her mother’s life.

The late Linda Nemarundwe Maraire or just Mai Chi, was a rare breed of a mother, musician, teacher, entrepreneur and arts promoter.
Brought up in a Christian family where western values were inculcated and sent to schools where education was supposed to wash away any traces of traditional values, Linda instead fought back and remained herself.
She became a great marimba and mbira player who even taught others who were drawn from a wider cultural divide.
With the backing of a husband, the late Dumisani Maraire, who understood music, Mai Chi founded her own marimba and mbira groups such as Boka, Dandaro, Kudana, Shumba and the electric band Mai Chi and Kubatana.
She also worked and recorded with the backing of the Portland Girls Symphonic Choir, Mhuri YekwaMaraire and Mimhanzi Ensembles among various others.
Besides this, she worked as the African Student Union adviser at Portland State University and helped in the formation of the Mutare-Portland Sister City Association.
As a music promoter, Mai Chi organised the inaugural Zimbabwe Music Festival that was held in Portland in 1994 and was tour manager for Thomas Mapfumo and the Blacks Unlimited, and the Bhundu Boys when they performed in the United States.
Off the stage, Mai Chi had a Bachelor's degree in Early Childhood Education attained from Antioch University.
She taught briefly in Zimbabwe before joining the Save the Children Fund in the late 80s.
As a mother, she taught her children the beauty of mbira music and to admire African traditional ways despite staying in the US where they could have easily adopted the western lifestyle.
Mai Chi, who died at 44 in 1997 in Portland, Oregon, the US, where she had taken residence was born in Masvingo's Ngundu area and attended schools in the area before going to Bulawayo.
It was during her time as a high school student that she met Dumisani at a workshop while she was teaching a song the he had written.
Although she was told that the man who had written the song was present and that he was teaching in the US, Mai Chi did not show any lack of confidence in her presentation.
After the workshop, Dumisani proposed marriage but she turned him down only to accept the offer when they had communicated over a long time by letters.
They married in 1975 and she joined Dumisani in Seattle, Washington, where he was teaching and performing Zimbabwean music.
The family returned to Zimbabwe briefly in the early 80s where Dumisani took up a post with the University of Zimbabwe and Mai Chi went to work for the Save the Children Fund.
When the family returned to US, in the late 80s, Mai Chi chose to stay behind in Portland where she ran a catering business.
Although Mai Chi's life reads like a very simple story of a rural girl who made it after marrying a man who had made it abroad, it is her adherence to traditional life that gives depth to what appears to be a simple story.
Mai Chi's father, Michael, who went to South Africa in search of fortune, was
converted to "Methodism and European ways' and got a job as a teacher at a missionary school on his return to the then Rhodesia.
Because of his adopted lifestyle, he wished his family to practice the western lifestyle. To achieve this, he made sure his daughters attended the best schools in the country.
To some extent, the girls too wished to live a western lifestyle until they moved to stay with their grandmother who inculcated in them the virtues of African traditional lifestyle.
"Raised traditionally is really when people understand about their ancestors.
Many people don't even talk about those things (ancestral history) in their families. Everything is church. Kids don't see it being practiced. They're not
participating. So when things happen, they don't know what to do. A traditional upbringing includes teaching children the ways of hospitality.
"How you give and take from elders. There are different ways of doing it. Like for example, if an elder walked into this house, we would be the first to greet them rather than waiting for them to greet us. If they need a place to sit, we'd have to offer them a place to sit," she told Joel Lindstrom and Catherine Heising shortly before her death.
Lindstrom is the manager of Kutsinhira Centre in Eugene, Oregon, and Heising is the principal organiser of the 1993 Marimba Fest in Eugene.
But her first encounter with music was when she met an uncle who played ngoma (drums) and was very famous in their home area.
Ndava, for that was the uncle's name, would invite her to attend sessions at a local beerhall and she would secretly leave the house.
While one would have thought that a girl brought up in the traditional way of life should have fallen in love with the western ways of life, Mai Chi chose otherwise.
And this is the life she taught her own children to live and cherish. Today her oldest daughter, Chiwoniso, is a shining example of what Mai Chi was about.

Below is an interview Mai Chi had in 1993 with Joel Lindstrom, director of the Kutsinhira Center in Eugene, Oregon — a school for the preservation of Zimbabwean musical culture in North America.